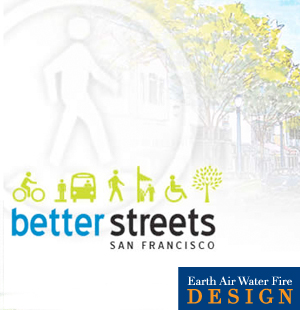 At the 2010 ASLA Annual Meeting, Keith Robinson, ASLA, Caltrans, Robin Gyorgyfalvy, ASLA, U.S. Forest Service, Tracy Newsome, City of Charlotte, and Philip Erickson, AIA, Community Design + Architecture highlighted different forms of complete streets taking shape across the U.S. Complete streets were defined as streets that include sidewalks, bike and car lanes, some green infrastructure component, and are accessible to “all ages and abilities.” To date, some 350 complete streets have been completed, but many view this as just the start of a budding nation-wide movement.

In California, the transportation department has been focusing on rolling out complete streets under an act that started to be implemented in early 2009. The law is directed at cities and communities and calls for streets to be accessible for all users. Even highways and about 25 percent of freeways are getting dedicated bike lanes, said Keith Robinson, Caltrans.

The goal, Robinson argued, was “to make streets part of public space” and green and attractive. Streets should be community assets, compatible with built and natural environments, and reflect the balanced needs of the community and transportation networks.

In Charlotte, which won an E.P.A. Smart Growth award for its urban street design guidelines (see earlier post), the goal is provide more and better travel options, said Tracy Newsome. This will be hard to reach given the city expects an extra 350,000 residents by 2030, and “these people aren’t bringing their own streets with them.”

Through a rigorous process of public engagement in street design, city planners in Charlotte have found that resident like trees, buffers, and moderate speeds and don’t like bare, sidewalk-less streets. Additionally, people view their nearby streets, even if they carry high-amounts of traffic, as neighborhood streets, and so have some sense of ownership.

A multistep process designed to gather community input led to a complete street design that has reduced congestion and improved safety — the street model has 16 feet of landscape, 11 feet of travel lanes, 8 feet of planting strips, 5 feet of bike lanes, and 8 feet of sidewalks and sidewalk easements.

San Francisco calls their complete, green streets plan, which has been approved by the city, “Better Streets,” says Philip Erickson, AIA, Community Design + Architecture. Some 25 percent of San Francisco is covered in streets, but the city sees these as an opportunity for expanding green infrastructure. The idea is to green city streets to deal with the city’s stormwater management problems, which are caused by its aging combined sewer infrastructure.

The challenge in San Francisco is getting all the different city agencies to play well together and coordinate. Planning, public works, transportation, and the mayor’s office of disabilities all have responsibilities for pieces of any better street.

To address this coordination challenge, the city focused on creating a pilot Better Street where zoning rules were thrown out and new concepts tested. The pilot greenway used permeable pavements, planters, trees, and landscape along with bike lanes to show the city how the new streets could work. The idea was to create a policy and regulatory framework and set of street standards that can be used to make Better Street development easier in the rest of the city.

Robin Gyorgyfalvy, ASLA, U.S. Forest Service, said even state parks in rural areas are getting on board with complete streets. In a National Park in Oregon, multi-modal transportation is enabled through complete streets. Bikes, cars, and buses are bringing residents from nearby Bend, Oregon into the park. The park service has also been especially focused on bringing inner-city residents into parks — many who live an hour away have never been to the forest.