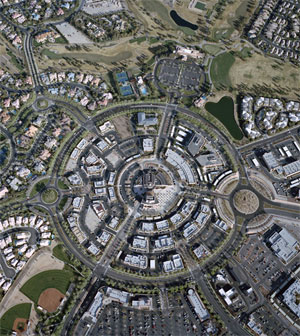 In one session at the TED Mid Atlantic conference, German photographer Christoper Gielen showed his startling aerial images of American sprawl, but asked viewers to consider them as an “aesthetic experience.” Shot while hanging out of a helicopter, Gielen’s photos demonstrate that very similar sprawl shapes appear across the country.

To find his sites, Gielen first examined statistical databases and honed in on areas with the highest foreclosure rates, which he said indicate where the most unsustainable development is. In Houston, he found perfect web-like networks of prefabricated houses with trees exactly in the same place. One community in Nevada (see image above) is “so perfect” incoming aircraft use it as a marker on their way to the airport. As for the community, “it’s sold as active living, but it’s isolated in the middle of the Nevada desert. It’s a prison of our own making. People are really inside their cars or homes watching TV.”

The high foreclosure rates among communities in Florida and Arizona demonstrate that many of these sites are economically unviable, but Geilen says they are also environmentally destructive. In one Florida sprawl community (see image below), the wetland was drained then water was reintroduced into managed channels. “The flow of the Everglades is being slowly cut off by development.” 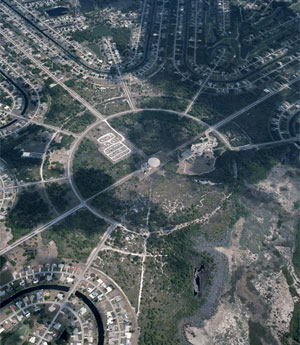 While land-use policymakers want to “reconnect the severed arteries of the Everglades” and create “archipelagos of development” in a sea of of untouched landscapes, many sprawl communities continue to be built.

On a more existential note, Gielen also asked why he was seeing the same forms over and over again in different parts of the country. “There must be some geometric sociology. Why do these shapes — circles, stars, or webs — come into form? Is there something deep in the human psyche?” 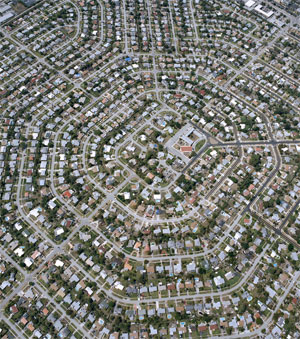 See Gielen’s photographs, which he will publish in a book next year.