OLIN, a leading landscape architecture and urban design firm, has rejuvenated the garden landscape of the jewel-box Rodin Museum, which is found on the Benjamin Franklin Parkway in Philadelphia. The $5.5 million site refresh was designed to “enhance and amplify” the original 1929 designs of the garden by French architects Paul Cret and Jacques Gréber, but is also part of a bigger project to “re-imagine and renew” the entire Benjamin Franklin Parkway as the central “artery” for the arts in the city, and connect with the Philadelphia Museum of Art master plan.

One highlight of the re-opened outdoor museum: the return of the great French sculptor’s The Burghers of Calais to the outdoors after more than 50 years of being locked inside. The sculpture was moved from within the sculpture gallery to a new spot in the east garden. In addition, two life-sized bronzes, The Age of Bronze, and Eve are now back in the museum’s facade. Adam and The Shade will find new homes in the garden. These five works, along with The Thinker at the Parkway entrance and The Gates of Hell at the doorway to the museum, means the site once again serves as a elegant frame for Rodin’s figures.

According to The Philadelphia Inquirer, the landscape had a number of issues caused in part by the deterioration of the parkway, but they were solved by OLIN’s careful interventions. “The landscape surrounding the Rodin grew so thick with hedges and underbrush that the pavilion was almost hidden behind a scrim of green. OLIN’s landscape architects devoted much of their efforts to clearing away the growth to reveal forgotten views of the diminutive museum and its free-standing stone gate, a replica of the one at Rodin’s 18th-century country estate.”

While keeping to Cret and Gréber’s formality, OLIN added new plantings and made “practical improvements” but largely focused on ensuring the site’s flow. Susan Weiler, FASLA, a partner at OLIN, said: “The garden’s parterres allow the eye to register the symmetry of the courtyard and the significant changes in elevation in the garden, allowing visitors to easily take in its many elements.” She added: “As we were designing the garden, we didn’t see it as divided into sections. It’s all about movement through the entire space: up the stairs, through the gate, into the courtyard, up to the museum. Visitors can take in everything from the east and west gardens to the stairs to the parapet.” 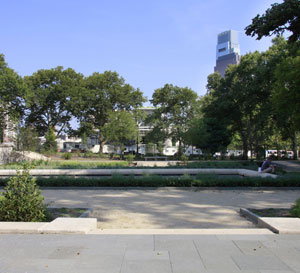 In the interior courtyard garden, the landscape architects created a “formal perennial garden” that will change in color and texture thoughout the seasons. Also, the team repaired the walls, stairs, and paving; planted trees, shrubs, and perennials; removed a few shrubs; added a new irrigation system; and create new lighting schemes. The Philadelphia Inquirer writes that OLIN removed “the fusty pillows of boxwood that dominated the planted borders. The beds now tumble with lavender, yarrow, and thyme.” 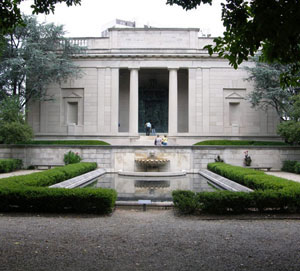 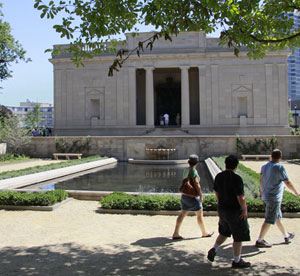 Here are a few close-ups of the new plantings.

Outside the garden, lawns were restored, new trees and groundcover were planted, along wth new pedestrian circulation routes (including stairs, curbs, pathways, and a drive to improve accessibility). Outer areas also feature the native plantings Cret and Gréber used, under a canopy of trees. 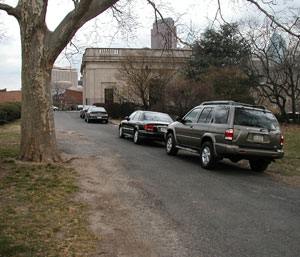 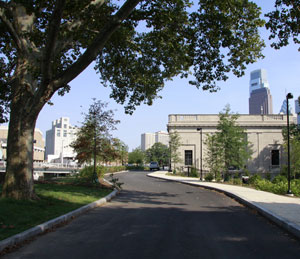 Still, more work needs to be done. While 80 years of grime were removed from the exterior limestone, the indoor parts of the sculpture gallery will close in September for a three-month renovation, which means some more Rodins may also move outside.

The Rodin Museum, a must-see in Philly, is next to the Barnes Museum and near the Philadelphia Museum of Art.

2 thoughts on “An Elegant Frame for Rodin’s Masterpieces”