Lonely Planet, producer of travel guides, has just put out a new book on the 1,000 Ultimate Sights. One can spend hours just looking through the different lists of “ultimate” natural sights around the world, including sections on the “greatest wildlife spectacles,” “most iconic trees,” and “most impressive waterfalls.” There are also segments that explore extraordinary forms of human interaction with the natural world, such as “most stunning gardens,” “most interesting bridges,” and “greatest roman sites.” Our favorite was a list of viewing platforms, often designed by landscape architects and architects to create closer connections with nature:

Lonely Planet writes that viewing platforms created by nature may be the most impressive. “Preikestolen – Pulpit Rock – looms 604m above Lysefjord, one of myriad incisions along Norway’s west coast. There are mountains aplenty hereabouts, but this summit seems built for purpose: its almost perfectly flat top juts out over the water (no safety barriers here), commanding uninterrupted if vertiginous views.”  If you are intrigued by Pulpit Rock, also check out this session at the National Building Museum on how Norway’s landscape architects and architects have designed a subtle yet beautiful set of platforms along the national tourist route.

Auckland’s 328-meter-tall Sky Tower enables visitors to interact with the views and heights in different ways: “A handful of high adrenalin options are available, 192m up: gaze out from the enclosed glass rotunda; don a harness to walk a dizzying lap outside; or plunge (with safety wire) at 85km/h to the plaza below – less lookout than leap-off.”

If you want to learn more about how birds live close-up, the Illawarra Fly Treetop Walk sets you within the forest canopy of Australia’s Southern Highlands. “Hovering 25m above the ground, between stands of eucalyptus, sassafras, blackwood and mulberry, this 500m-long platform gives the wingless a glimpse of the avian lifestyle. And the bird’s-eye views are spectacular, from close-ups of tree-dwelling flora to sweeping panoramas of the surrounding escarpment.”

At one of the most-visited sights in the U.S., there’s the Grand Canyon Skywalk, which was created in 2007. The 20 meter-wide glass and concrete “horseshoe” with a see-through floor jutting out over a “side canyon” of Arizona’s gorge has been controversial. Some would rather leave nature’s work alone. However, Lonely Planet says that the Hualapai Indian tribe, which manage the site, approved the project. Visitors are charged $30 per use. 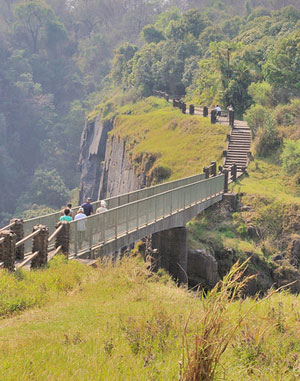 Victoria Falls, one of the world’s greatest falls at 100 meters high, has a spectacular viewing bridge at Knife-Edge Point. “Walk over the footbridge to this sturdy buttress where – if the mist is being blown in the opposite direction – you can gaze at the falls and the churning abyss below.”

Instead of a viewing station, the Iguaçu Falls in Brazil actually has a viewing trail that takes visitors through the cascade. “This South American cascade – a 3kmwide, 80m-high tumble of 275 separate falls, dripping in tiers through the jungle – is shared between Brazil and Argentina. And it’s on the Brazilian side that the Waterfall Trail leads out to the viewpoint below the Garganta do Diabo (Devil’s Throat) – Iguaçu at its most thunderous and spectacular.” 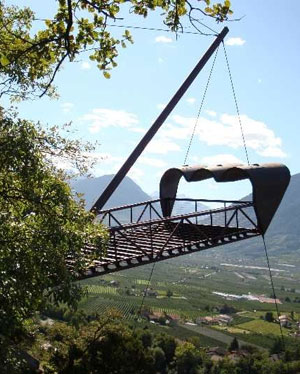 In Italy’s South Tyrol, Architect Matteo Thun created a look-out “suspended over the trees” as an addition to Trauttmansdorff Castle. “It gives a fine focus to those who dare step out onto its transparent gantry: over the vineyards, orchards, rooftops and mountainsides around the sophisticated town of Merano. It’s a grand garden to gaze over, too. Arranged around the neo-Gothic palace are swaths of rhododendrons, terraced water gardens, exotic palms, a house of bees and the world’s oldest vine.” 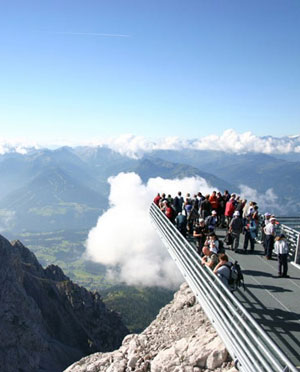 Dachstein Sky Walk peers out over this 2,700 meter mountain in Austria, offering panoramic views across state lines and international borders. “If you can bear to look, that is – it’s a dizzying prospect. And the wind and snow frequently flurry, making this an exposed, if exhilarating promontory. The journey up is even more hair-raising: the cablecar from the Türlwandhütte rises nearly 1000m to the Hunerkogel station, skimming the limestone cliff face (you can see every crack and crevice) by what feels like mere inches.”

The viewing platform of the Aiguille du Midi gives awesome views of Mont Blanc. The Aiguille itself is quite a mountain at 3,842 meters. “But it’s a democratic peak: a two-part cablecar ride from the town of Chamonix below zips from valley bottom to the top – a 2,800m altitude gain – in just 20 breathtaking minutes. This enables anyone with a head for heights to get intimate with the legendary massif – a perspective usually reserved for expert mountaineers.”

For a few years at least, Kuala Lumpur’s Petronas Towers were the world’s tallest buildings. That record was recently beaten by the World Financial Center built in Shanghai, and now the just-opened built Burj Khalifa  in Dubai. A Sky Bridge at the 41st and 42nd floors is an “engineering marvel; with its huge supporting ʻlegs’ it looks like the bolt holding the twin 452m-high skyscrapers together. At night it’s even more impressive, when the entire complex glitters brighter than a Christmas tree.” At 170 meters up, the views from the Sky Bridge, which are accessible via a “super-fast lift” are worth seeing.

One thought on “Designing Views of Nature”