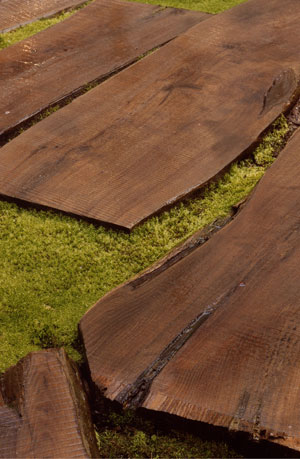 Michael Van Valkenburgh, FASLA, and his fellow speakers got multiple rounds of spontaneous applause at the 2011 ASLA annual meeting for hosting a session on a topic near and dear to many design professionals and wood experts: how to end the unsustainable harvesting of Ipe wood and scale up the use of sustainable alternatives. The real alternative may be Black Locust (Robinia pseudoacacia), which Van Valkenburgh and other progressive landscape architects, architects, engineers, and wood manufacturers have already been using for some time. In addition, domestically-grown Black Locust may offer new opportunities for local sustainable forestry businesses. The trees grow fast and are hardy (in fact, in many areas, they are treated as invasives) and can even take root in urban areas, so they can provide a new source of employment in cities like Cleveland and Detroit, where populations are collapsing and landscapes aren’t as productive as they could be.

Ipe is a tropical hardwood often used in outdoor decks and furniture because it’s so resilient to rain, insects, and weather changes. It’s special properties also mean that it lasts a long time. However, there is a dark side to this wood, which is all too often still used in park and residential projects. Just a few Ipe trees are found per acre in dense, lush tropical forests, which means foresters must wreck havoc on the forest to extract and process those single old trees. Van Valkenburgh and others argue that there must be alternatives.

Stephen Noone, ASLA, senior associate, Michael Van Valkenburgh Associates, said Black Locust lasts just as long as Ipe. He said it’s a “pioneering, not invasive” plant that “takes root on sites that other plants don’t like.” Unlike Ipe, the tree grows together in densely planted areas. In Europe and Asia, it’s already treated as an acceptable crop. In fact, a number of countries are moving forward with planting large groves for wood production, a business that, oddly, has failed to take root in the U.S.

A research project by Michael Van Valkenburgh Associates’ interns found a plantation in Hungary producing a range of different quality Black Locust woods, including top quality woods. They found that Black Locust can “only be planted in marginal areas where Oak can’t be established.” In a smart move, a local forestry research organization and local wood producers aforested a massive area. Now, 8,500 hectares of dense Black Locust forests are being harvested in just one area there.

Black Locust has “high natural durability, is heavy and hard, but has a tricky kiln drying process,” said Noone. It’s “not going to rot and is insect resistant.” Noone delved into the details of moisture content, and the process needed to achieve the desired content levels. There is a complex multi-step process that involves lettting the freshly cut wood air-dry to reduce moisture and then using a “dehumidifier kiln.” Noone said “the process is very strict,” and “dilligence is required on the part of the drier.” There’s also a long lead time for landscape architects: 40-50 days until the wood can be used. But it’s worth it: Beyond the sustainability benefits, Black Locust is also cost-effective. In bulk, it’s $5.44 per square foot, while Ipe is more than $7 per square foot.

Building a Bridge in Brooklyn

A new pedestrian bridge made entirely of Black Locust and designed to move people from neighborhoods in Brooklyn into Van Valkenburgh’s Brooklyn Bridge Park (see earlier post) is now taking shape. Ted Zolli, HNTB, said in this case, “black locust is better than concrete in terms of its compression, strength, and flexibility” and an “incredibly viable structural material.”

Zolli showed how timber bridges aren’t a new thing. Some 20 percent of current bridges are made up of wood and some are more than 100 years old. This 400-foot long bridge is comprised of pre-fabricated pieces created off-site and the delivered and installed in BK. Some parts of the bridge span 120 feet. All together, there’s about 30 tons of wood. He said for this gangway, Black Locust was the right way to go.

HNTB purposefully tested how vulnerable the wood is to fire and found that it doesn’t lose its strength as it burns. “It’s better than steel and will do better in a fire than the cable wires we are using.” For him and his firm, the real challenge was getting a hold of longer planks and finding the right connector systems for the bridge components.

The Properties of Black Locust

Don Lavender, Landscape Forms, a man Van Valkenburgh called a “national treasure,” discussed the opportunities and challenges in scaling up a domestic Black Locust industry. He said there is great potential for the tree in the U.S. but it’s about “obtaining prime examples and taking selections.” Lavender said the best trees are found in the Appalachian region.

Black Locust was originally given to settlers by the government during the early expansion of the U.S. because it’s very fast growing. Within 15-20 years, the material can be cut down and burned. At 30 years old, it can be used for materials in homes. Lavender said the best of these trees “competed for sunlight with other trees.”

The tree can be used for many products, and even lesser-grade woods aren’t wasted. “100 percent of the tree can be purposefully used.” Lavender said lower grades can be used for mulch, biomass fuel, parquet, and greenhouse poles. The higher grades, #1 grade, premium and premium plus (the top 5 percent), are the result of a more challenging “kiln drying process” that requires “patience.” The wood is tough and resistant to drying for the “same reason it’s so resistant to decay.”

Once dried properly, it can easily be “cut, sawed, drilled, sanded, and shaped.” No outdoor finishes are needed and its screw retention is good. Its Janka hardness also compares favorably with other woods. At 1700, it’s better than Red Oak (1290), but a bit less than tropical hardwoods like Jarrah (1910) and Ipe (3684).  It’s also difficult to glue. But biologically, Black Locust is “remarkably decay resistant.”

Scaling up Cultivation and Production in the U.S.

Van Valkenburgh said the U.S. is falling further and further behind globally. “The country is losing its edge.” Currently, there are 5 million acres of Black Locust under cultivation worldwide, but “virtually zero in the U.S.” Korea has 1.2 million acres, China has another 1 million, while Hungary has 270,000 acres. “This is something that has the potential to be an economic engine in many parts of this country.”

Instead of being viewed as an invasive, as it is in many parts of the U.S., Van Valkenburgh said it should be grown in set-aside areas. Lavender added that the Amish, who “don’t waste anything,” has been using Black Locust for ages. The Amish, who have perfected techniques over generations, are in fact a perfect model for Black Locust production: “proper kiln drying is not something you just get into one day. It takes generations to learn this.” He added that a number of firms have “blundered into kiln drying” and ended up with kindling. “It needs to be done methodically” if an industry is going to bloom here.

Van Valkenburgh is currently using Black Locust imported from Hungary. A firm in Massachusetts is importing containers from Hungary and “taking it upon themselves” to expand the domestic market. While using this wood puts him out of the 500 mile range the Sustainable Sites Initiative (SITES) calls for in sourcing sustainable materials, he said “we have to think bigger about sustainability. The lifespan of these woods is several multiples higher than others.” Still, he wants to see the woods grown domestically.

The Black Locust market in the U.S. is “still in its infancy” despite the advocacy efforts of Van Valkenburgh and others. Hopefully, some smart city officials will see an opportunity. As one audience member said, Detroit and other cities could not only turn their abandoned lots into forests, but Black Locust forests. Van Valkenburgh went even further: “Planting on reclaimed sites is a great idea.”

34 thoughts on “Why Use Ipe When You Can Have Black Locust?”

Leave a Reply to Tired of the BS Cancel reply