The paintings and drawings of Roberto Burle Marx, Hon. ASLA, one of the most influential landscape architects of the 20th century, are the subject of a new show by Rooster Gallery in downtown Manhattan. Tablecloth/Toalha features a number of his later works, which were created during his stay at a close friend’s house in Constância, Portugal. According to Lauro Cavalcanti, curator of the retrospective Roberto Burle Marx 100 anos: A permanência do Instável, Burle Marx “‘…painted every day in the morning and in the afternoon he did his gardens’ and did not enjoy the fact that his paintings were relegated to a secondary position.” Indeed, Burle Marx was an equally successful painter, with his works representing Brazil in the Venice Biennale in the 1940s.

In addition to the tablecloth he created to fit his friend’s table, the exhibition includes 12 india-ink works on paper that are evocative of his landscapes. “While dispensing color – something inherently his due to his activity as a landscape architect – Burle Marx still follows the same provocative abstract morphology that characterized South-American art during the second half of the 20th century, providing the viewer some hints on issues like urbanism and landscape.” 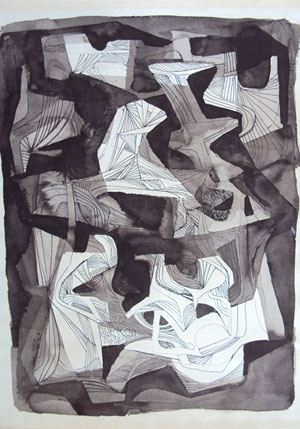 On his art and landscape architecture, Rooster Gallery wonders which side of his work influenced which more. “In the end, one might question whether it is the architectural grammar that is present on Burle Marx’s paintings or the pictorial language that is present in his landscape projects.”

Burle Marx, who died in 1994, had a lifelong partnership with great Modern architect and fellow Brazilian Oscar Niemeyer. However, he is often seen as simply “complimentary” to him, writes André Escarameia in an essay for the gallery. Increasingly, though, Burle Marx’s own genius in creating lush yet also very Modern landscapes is being viewed independently of any collaborations.

According to Escarameia, when Marx died at age 84, he had completed more than 2,000 works of landscape architecture. Just a few of his famous landscape works include Flamengo Park (Rio de Janeiro, 1965), the Copacabana promenade (Rio de Janeiro, 1970), and Inhotim Park (Brumadinho, 1984).

Escarameia quotes Coelho Frota, who writes: “He was a draftsman, painter, great connoisseur of botany, set designer, musician, sculptor, and landscape architect. To appreciate any one aspect of Burle Marx’s multifaceted personality, one must bear in mind that we are dealing with an anthropological phenomenon, a cultural complex, a whole Burle Marx tribal group in which each individual was autonomous and, at the same time, relative.”

See the paintings in New York before March 4, a slideshow of some of his landscape architecture works, and learn more about his history and influences.