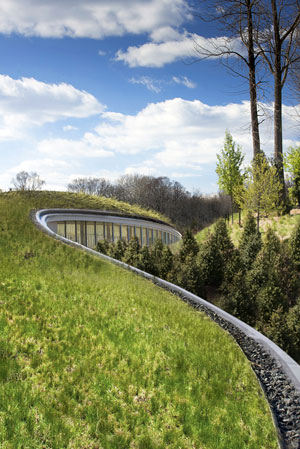 The Brooklyn Botanic Garden (BBG) is not only very serious about its plants but also about design. Assembling a top-notch multidisciplinary team led by architecture firm Weiss/Manfredi and landscape architecture firm HM White, the BBG just added 100,000 plants with its new, model-breaking 3-acre visitor center, which provides a vivid starting point into the 52-acre garden. Of these 100,000 plants, some 45,000 have taken root on the visitor center’s 10,000-square foot roof meadow that blurs the lines between building and landscape. The other 55,000 — including cherry, magnolia, and tupelo trees, viburnums, roses, and “water-loving” plants — are spread throughout the new garden. A total of 100 plant species are represented, 90 of which are new to the garden.

On the new entry way experience, Scot Medbury, president of Brooklyn Botanic Garden, said: “The visitor center is both an extension and elevation of the garden’s topography, softening the transition from the gray to the green and underscoring the garden’s long-standing commitment to connecting the urban and natural worlds in new and forward-thinking ways.” NYC Cultural Affairs commissioner Kate D. Levin added: “This dynamic new Visitor Center will teach audiences about horticulture through cutting-edge, green infrastructure.”

HM White tells us about how visitors enter through their new landscape: “The visitors are greeted along Washington Avenue by an arrival plaza with two garden basins carved out of the concrete surface and a steep sculptural berm as backdrop. As one progresses through the gateway of two buildings, the unanimity is maintained by an undulating living roof meadow above that slips through the hillside. As the architecture peels away, a 3-acre landscape slowly unfolds in swaths of horticultural diversity.” The site is a “stage set” designed to bring visitors into a “native woodland, a grassland palette, which was absent from the Garden’s extensive plantings.”

The design purposefully creates views along the paths, but is also engineered to ecologically manage stormwater. “New topographic features allow for views from as high as 25 feet above ground level, crested by a mature Ginkgo allée, and form the edge of the garden and the spine of the visitor center project. The sculpted berm landform spreads and slows the flow of rain water through planted depressions and direct surface run-off to stone-filled stormwater channels and, ultimately, to terminal raingardens. These function as bioinfiltration basins at the center’s entry and event plazas and absorb stormwater and avoid discharge to the city’s combined sewer system. Similarly, all water not held on the living roof is directed to the basins.” 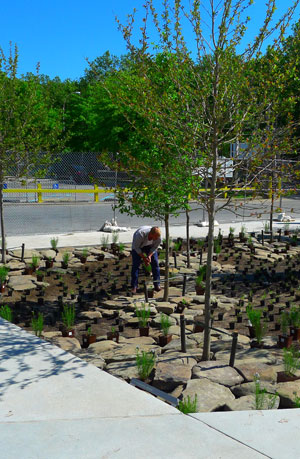 Unlike some other landscape projects, there’s no need for any “subsurface water retention basins,” or below-ground cisterns to store water. There’s a new “landscape infrastructure” comprised of soils, plants, and water conveyance systems that keep the landscape alive. HM White says: “Bio-engineering technology was fused with sustainable horticulture design and soil engineering to reveal a captivating landscape infrastructure. Collectively, these efforts are expected to conserve significant amounts of water each year: 200,000 gallons of water from the living roof alone.”

Stormwater is then designed to be funneled via a “diffuser system” set up to spread water to the plant communities. The salvaged and re-engineered soils work together with carefully-chosen and placed plants to make the overall system work. “The soil profiles were specifically designed to increase volume capture, facilitate ground-water recharge and filter pollutants. The multi-layered riparian plant community has evolved to survive seasonal cycles of inundation and drought. Water quality is improved through filtration, sedimentation, and biological processes.” 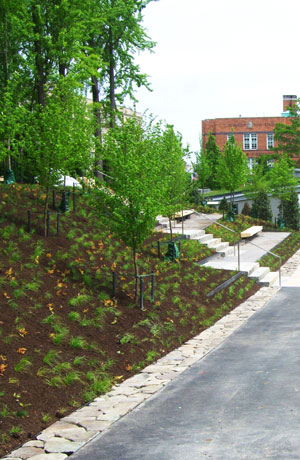 Hank White, a licensed landscape architect, said the project was a true collaboration with the client, architects, civil engineering firm Weildlinger Associates, and soil scientist Pine & Swallow, to make the system not only technically-sound but also educational. White said: “We envision that visitors will now be able to observe and witness native plant communities actually performing a vital role in absorbing and cleaning stormwater.”

According to Weiss/Manfredi, the 20,000 square-foot building itself, which houses “interpretive exhibits,” event spaces, and a store selling garden products and plants, is designed to be as sustainable as the landscape. They write about the building’s sensitivity to its environment: “The curved glass walls of the visitor center offer veiled views into the garden; there is fritted glass filtering light and deterring bird strikes. Its clerestory glazing—along with the fritted glass on the south walls—minimizes heat gain and maximizes natural illumination. A geoexchange system heats and cools the interior spaces.” The team is hoping for LEED Gold certification (and perhaps SITES certification?) 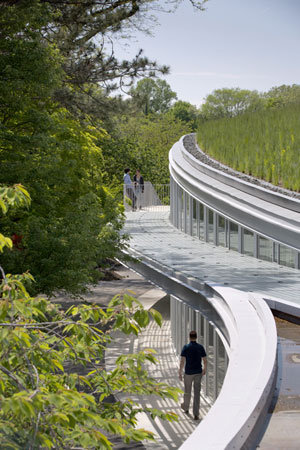 Stay tuned: More cutting-edge landscape architecture is coming. Weiss/Manfredi tells us a new “herb garden, woodland garden, and an expanded native flora garden” are in the works for the north side, while at the southern end, there will also be a new water garden (a water conservation education project), a new children’s discovery garden (designed by Michael Van Valkenburgh Associates), along with an “expanded and redesigned public entrance at Flatbush Avenue by Architecture Research Office.”

Explore the Brooklyn Botanic Garden when next in NYC.