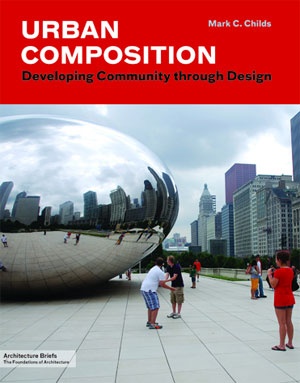 In Urban Composition: Developing Community through Design, Professor Mark C. Childs, who teaches architecture at the University of New Mexico, declares that “settlements are not just the sums of their parts; their poetry and vitality comes from their collective composition – the interactions among multiple designs.” In other words, it’s the way multiple individually-designed pieces work together that leads to the overall success of a place. These pieces include buildings, parks, streets, and works of public art. Each of these components is individually crafted by an architect, landscape architect, or artist.

Childs argues that good urban design occurs through a concinnity of these components. He defines concinnity as “the skillful and harmonious adaptation or fitting together of parts to craft a whole.” He writes “great places emerge from the concinnity of incremental acts of design. Existing work frames new projects, which in turn inspire future works.” Each designed element should innovate while still drawing from the existing cultural, environmental, and physical context. In this way, the components of a city can be individually interesting and part of a coherent larger whole.

Childs describes these individual acts of design as falling within a design hierarchy. He gives the example of a building, which is located on a lot, which is part of a block, which is part of a larger pattern of blocks and streets, which is in turn influenced by the topography of the city. Each of these layers becomes progressively permanent: a building is more likely to change than the lot boundaries, which are less permanent than the underlying topography. Additionally, a building creates new spaces for interior design, from the division of rooms to the arrangement of furniture. These layers of design define how different design professions interact with each other. The interactions between multiple designers operating at different scales leads to a rich urban composition. However, the precise distinctions within this design hierarchy aren’t always clear. Childs writes, “when do architects place buildings in landscapes versus landscape architects place designs around buildings?”

Childs mentions public works, projects that “have a principal goal of providing a collective good or service to a catchment or district.” These projects, frequently known as urban infrastructure, influence the built form that falls within them. “By providing a public utility and structuring a district,” Childs writes, “public works create a pattern of niches for various built species.” As an example, ecological systems that provide services — including biodiversity, flood control, and stormwater filtration — can be considered collective goods. Because these goods are delivered to us through landscape design, our landscapes can be viewed as infrastructure. In the same way that a road layout influences how buildings are shaped, landscape infrastructure frames and guides our built forms.

The growing awareness of the importance of urban ecology and the increasingly blurred distinction between the natural and built environments raise questions on landscape architecture’s position within the hierarchy of urban design. Isn’t ecological infrastructure now playing a larger role in making our cities more unique, boosting the role of landscape architects in the process?

While Urban Composition tends to be architecturally oriented, it’s an interesting read for any urban designer. Childs effectively communicates the ways designers need to consider the context of their designs, as well as their professional roles, in order to contribute to a successful urban composition. After all, the greatness of a city doesn’t depend on its individual buildings or parks, but on how those components work together.