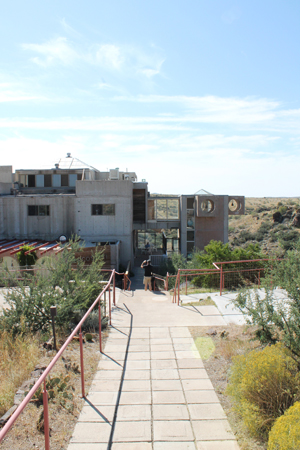 Arcosanti is an experimental town located 60 miles north of Phoenix in the Arizona desert. Architect Paolo Soleri founded Arcosanti in 1970 to test his concept of “arcology,” which is a literal co-joining of the words architecture and ecology. An arcology was envisioned as a hyper-dense city within a building, concentrating the complexity of human settlement into a single, compact structure. Developed as a response to the wasteful and destructive process of suburban sprawl, Soleri describes the arcology as a process of “miniaturization,” a dramatic shrinking of the footprint of human settlement. Viewing urban expansion as fundamentally destructive to the environment, Soleri’s arcology promotes an ecologically harmonious settlement. 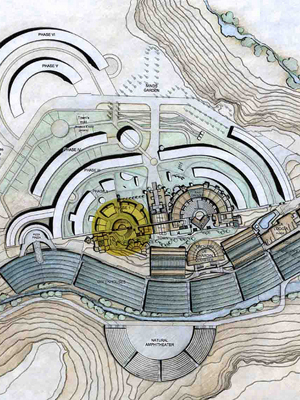 Arcosanti was designed as a tiny arcology prototype. Planned to develop into a community of 5,000 people, Arcosanti has only grown to a fluctuating population of around 100, as I learned on a recent tour of the site with Cosanti Foundation president Jeff Stein. Even with its small size, it’s a truly otherworldly place to visit. Consisting of a series of large, mixed-use complexes, Arcosanti describes itself as an urban laboratory where theories can be tested. 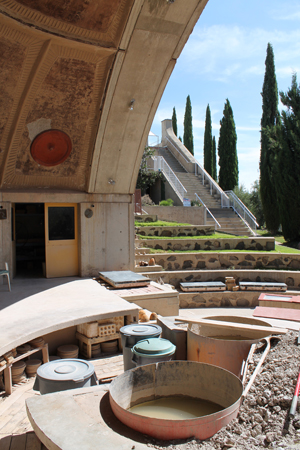 The city in the desert is composed of a series of concentric crescents and apses, with living spaces built into the edges of the crescents and open communal spaces in the centers. Benefiting from the high desert climate, these communal spaces are open to nature, designed to maximize beneficial environmental conditions. This arrangement allows the passive heating and cooling: heating is largely accomplished through buildings’ orientation toward the sun. Vents even run from the greenhouse into living spaces, providing an additional source of warmth. Built into the side of a cliff, the moderating properties of the stone help keep the buildings cool in the summer. 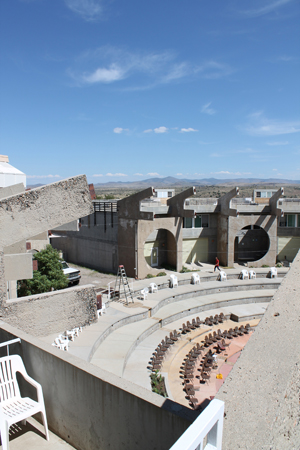 In addition to their environmental function, the open spaces within Arcosanti are designed as social spaces. These are spaces are flexible and intended for a variety of uses: the East Crescent is composed of living spaces that trace around the perimeter of an amphitheater, where, during my visit, a theater troupe was preparing a production. 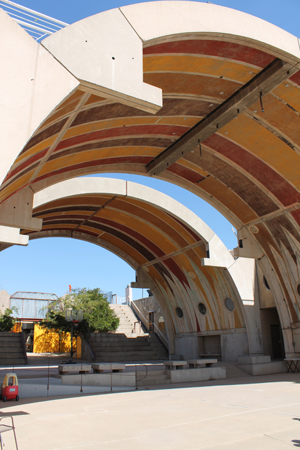 The vaults form another flexible space. The first structures built on the site, the area enclosed by the vaults is used for large events and projects. 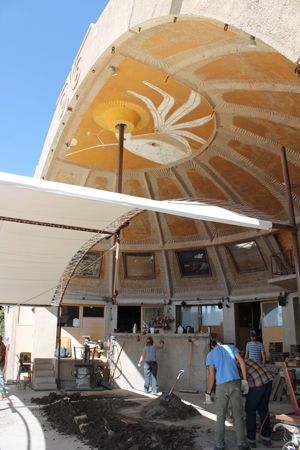 Perhaps the most distinctive, and surreal, characteristic of Arcosanti is its economic engine: windbell production. The inhabitants of the arcology work in the apse-enclosed foundry, pouring bronze over handmade clay and sand molds to create bells. Open to the environment and overlooking the stunning desert landscape, this process is unlike anything I have ever seen. Watching clay molds being smashed against the ground, Arcosanti felt lost in time. 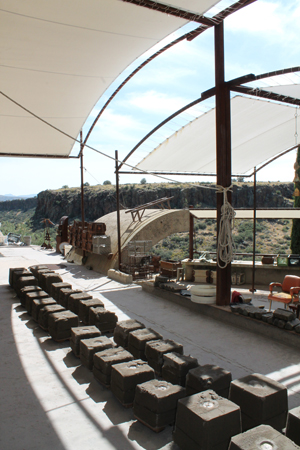 Significantly, the production of windbells is not a recent development. In fact, the crafting of windbells is how Soleri has financed his career as a theoretical architect in the first place, and they are largely responsible for funding the construction of Arcosanti. In other words, windbells are not just a source of revenue for Arcosanti, but a fundamental component of the project’s existence. 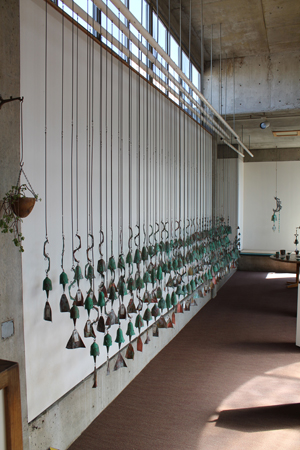 Arcosanti is a strange and fascinating reaction against suburban sprawl and American car culture. While highly attuned to its environmental context, Arcosanti does not attempt to integrate ecology and settlement (as many contemporary landscape architecture projects do). Instead, it recommends we reduce our environmental impact solely by shrinking our footprint. According to Soleri, who is still active into his 90s, to preserve the natural environment we must leave it alone. 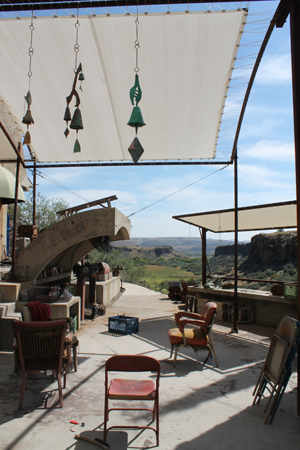