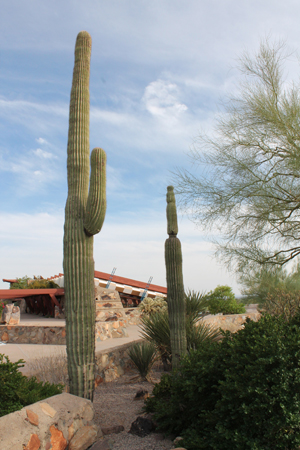 Beginning in 1937, Frank Lloyd Wright began creating his winter studio and architectural campus Taliesin West, his ode to the majestic Sonoran desert. Still a working architectural college to this day, the place is dramatically different from his urban masterpieces like the Guggenheim Museum in New York City and Robie House in Chicago. The buildings are unassuming and seem to purposefully nestle into the cacti-filled landscape.

The campus’ main buildings took four years to build. During that time, Wright, his 3rd wife, and 25 apprentices all slept in tents under the stars. During the first years, there was no well, so water had to be brought in from miles away. On the 640 acre site, Wright left his tent to first build a document vault, then the studio, kitchen, dining and bedrooms. Using wood from local trees to build the frames and quartzite boulders to establish the foundation, the buildings are very low to the ground, and were originally filled with open window frames covered only in canvas. It was only after many years of protest by his wife that glass windows were put in.

Wright thought the glass wasn’t needed because he oriented the spaces to maximize solar and heat gain in the winter and minimize the sun’s glare in the summer. However, he eventually discovered that the glass windows only enhanced the passive solar capabilities of the buildings. Ever careful about how light interacted with interior spaces, Wright used his windows and canvas shades to further control the interplay of light and dark in the interior spaces, diffusing light and bouncing it off the interiors to create more comfortable spaces. So Wright was not only an early innovator in the use of solar passive technologies but also controlling light through shades.

The patios, gardens, building were all set in patterns of 16-foot-square grids, said our tour guide. The interior frames are also all standard sizes so once a visitor figures out the size of the grid and frames, they can quickly figure out total square footage.

Outside, the gardens were meant to deeply complement the buildings and work together as one. Like Richard Neutra’s work, Taliesin West is rooted in its native landscape. You can’t really imagine it elsewhere.

In the gardens that provide middle-grounds between the home and the desert and mountains, Wright’s original landscape architecture, one of his few works of landscape, has been faithfully preserved. In between the view of the home and Papago mountains, there’s a triangular pool, which was created as an amenity, source of comfort in the hot months, and security measure in case of fires. The triangular pool, which also mirrors the triangular shapes of the mountains, is dramatically juxtaposed with a bright red door into the studio and 75-year old Joshua trees. In this space in the early 1950s, the gravel came out in favor of grass.

The desert views Wright, his wife, and workers enjoyed are made even better by the flora and fauna: grand Sagauro cacti and fuzzy Jumping cacti make a dramatic statement and we even saw wild Gambel’s quails running together in the campus. But this landscape is no cultural desert either – it’s been used for thousands of years by the Hohokam indians. Their dense network of canals were basically copied by the settlers who took over their lands.

Wright also oriented the home so that there were distinct breezeways, which provided comfort for those living there. The breezeways double as spaces to enjoy certain perspectives of the mountains. Wright set up a few views of the mountain peaks he loved best. 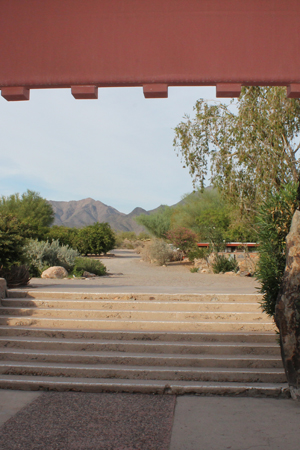 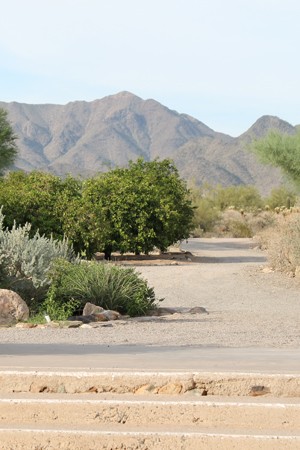 Moving through one of those breezeways, there’s a central plaza, with gardens filled with native cacti set out on grids. While the space seem designed to be moved through as opposed to inhabited, the guide said Wright constantly used the space for events, reconfiguring the outdoor spaces for garden parties. The guide said Frances Nemtin, one of Wright’s original apprentices from the 1940s is still managing the gardens in keeping with Wright’s original design. The only major change: there had been a set of palm trees but they grew so large architects in residence thought they were messing with the proportions of the site. They were dug up and given to a nearby resort.

According to our tour guide, Wright knew that sprawl would eventually surround his beloved Taleisin West. Until the 1960s, they managed to keep development at bay. Now it’s basically found at the end of a cul-de-sac. Sadly, it’s one of the few remaining intact desert habitats in the broader Phoenix region, which sprawls out some to a gargantuan 1,650 square miles. Our guide said developers are ever swarming over their parcel of nature but always let down when they hear that the entire 550 remaining acres are a National Historic Landmark. Let’s hope it stays that way forever.

One thought on “Frank Lloyd Wright’s Ode to the Desert”