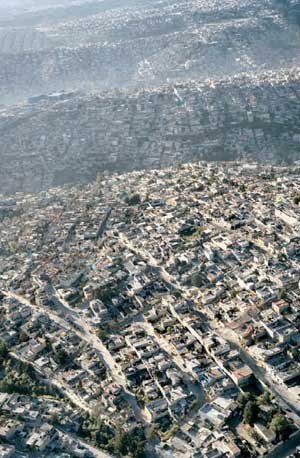 Showing an image of sprawled-out Mexico City, Ricky Burdett, Professor of Urban Studies, London School of Economics, told the crowd at the Innovative Metropolis conference hosted by the Brookings Institution and Washington University in St. Louis that we are now living in the era of the “endless city.” These cities are endless because they are humungous and also joining up together into megapolises, region-cities. But within the endless city, there are differences. As an example, Burdett said the average commute in Mexico City is 4 hours each way, while it’s just 11 minutes in Hong Kong. In other words, some are strained to the max and not very efficient while others work pretty well.

Cities now consume 70-75 percent of the world’s energy and account for 75 percent of global carbon dioxide emissions. Beyond the environmental implications of rapid urbanization, there are also social impacts. One-third of all urban residents (more than a billion people) now live in slums. These slums, the edges of cities, are ever-growing. “Every minute and a half someone has moved into a slum in a city in the developing world.” With the expansion of cities, there’s also increased inequality. In Sao Paulo and other developing world mega-cities, unplanned developments can be seen right up against gated wealthy communities, displaying the wealth inequality in a dramatic way.

While Burdett said everyone would like to be as sustainable as Copenhagen, creating true sustainability in a mega-city is a totally different story. With improved incomes, more people buy cars. Showing a graph, Burdett explained how once countries move up the human development index, their ecological footprint often climbs. The worst offenders are the U.S., Canada, and some European countries, but, increasingly, upper and middle classes in the developing world are catching up. In Sao Paulo, more than 1,000 people now commute via helicopter, around the same number as do in New York City and Hong Kong.

Many growing cities are chewing up their ecological functions. “Sao Paulo’s extraordinary city center has only grown outwards, pushing the poor out of the city.” The result: the edges have now been decimated, with people living in shacks right up to the city’s water reservoirs. Parks have almost all been totally consumed. The same story could be told for many other developing world cities.

Some developing world cities are starting to respond. Bogota, Colombia, with a population of more than 7 million, launched Transmilenio, an innovative bus rapid transit (BRT) system, to offer more sustainable transportation options that provide service to the poor who commute and also reduce congestion. For those who can’t afford the bus, there are now bicycle highways filled with bicycle commuters. Bicyclists seem to be everywhere there, supporting close-connected neighborhoods.

Other mega-cities, mostly in the developed world, are also demonstrating that growth doesn’t necessarily mean a rise in energy use and greenhouse gas emissions. London and Berlin were held up as examples of large cities using “design and physicality to create density with social and environmental benefits.” (Burdett also made a point to differentiate between housing and work density: the first relates to the number of people who live in a given area, while work density relates to the density of population using infrastructure to commute. If a city has a high work density, it must accommodate heavy periods of movement during peak times. The average commute in NYC is now 1 hour. The housing density in Hong Kong is even higher than NYC’s, but the work density is far less, with commutes around 11 minutes).

London is seen as an example of an endless city actually promoting all forms of density. “The city has actually done some really smart planning. Development stops at the green belt.” By law, London’s immovable green belt forms the outer-edge of the city. Even with one million new people expected to be added in the coming years, the city has to fill in or redevelop instead of sprawling out.

One example of a project that created density through urban redevelopment was the new Olympics site. Located in an area of East London well-connected to transportation and green infrastructure (the Lea Valley), the site was an empty rail yard and home to a number of industrial firms. There was even a depot for old refrigerators, a “fridge mountain.” London purposefully targeted this area because its population had the lowest indicators in the city. Also at the edges of the community was an artist’s colony and some of the most vibrant yet poor multi-ethnic communities. “This was a real opportunity to address inequality.”

The new site master plan, created by U.S.-based landscape architecture firm Hargreaves Associates and UK-based LDA Design, created space for 15 billion pounds worth of new parks, sports facilities, and housing for all the athletes. But the city and the design team were really smart: the site was designed at the beginning to be reconfigured into a mixed-use development with 900 new affordable condos, healthcare facilities, retail malls, and parks after the Olympics. In fact, some $400 million was actually set aside at the beginning of the project to accomplish all the reconfiguration. Some examples: Zaha Hadid’s famed swimming pool had wings that came off afterwards, shrinking the footprint of a building. Another sports facility has been deconstructed all together and the Brazilians may buy it for the Rio Olympics. A really wide bridge was designed to cut in half so visitors to the now-emptier site won’t feel like they are lost in huge Modernist plaza.  A new park by James Corner Field Operations, the landscape architects behind the High Line, will transform some 55-acres of the Olympics site. Burdett, who was an advisor to the development authority, said the site has gone being a “closed event to part of an open city.”

While the London Olympics may prove to be a success for East London, improving density and reducing inequality, can other cities undertake similarly massive and expensive urban redevelopment projects? Burdett said that the London Olympics accelerated progress in addressing entrenched problems in East London by about 70 years, but other cities can accomplish the same if they have a “long-term vision.” Incentivizing urban redevelopment and density works if cities can set limits at the edges. In many developing world mega-cities (and even developed world ones), runaway developer-led land speculation at the edges has led to sprawl. “There have to be no-go areas outside the city.”

Burdett added that city “form doesn’t necessarily determine prosperity, what does is well-connected infrastructure that enables the possibility of integrated growth and interaction.” In other words, cities with lots of different shapes can succeed. Cities have long been formed by particular geographies or hydrologies, but well-connected density is more likely to occur through tighter urban redevelopment projects than through more amorphous sprawled-out shapes.

Watch webcasts of the conference.

2 thoughts on “The Rise of the Endless City”