Jinny Blom, a master landscape and garden designer in the UK, has used a modest space at the Chelsea Garden show to create a rich, multi-layered garden that may also do some good. Commissioned by Sentebale, a children’s charity founded by Prince Harry and Prince Seeiso of Lesotho, and B&Q, a UK home improvement store, the garden is designed to not only be beautiful but also raise awareness about Lesotho’s “needy and vulnerable children, many of whom are victims of extreme poverty and Lesotho’s HIV/AIDS epidemic.”

Sentebale means “Forget Me Not” in Sesotho, the language of Lesotho, a small, landlocked kingdom in the Drakensburg / Maluti mountain range of southern Africa that has a population of around 1.8 million. According to a press release, the Forget-Me-Not theme was central part of the partnership and garden. Lesotho is sometimes described as the Forgotten Kingdom, and those kids could certainly be easily forgotten by the global community.

Of course, Forgot–Me-Nots are featured in the garden, woven in with anthriscus, poppies, and other plants, like Silene Fimbriata, a native of Lesotho. 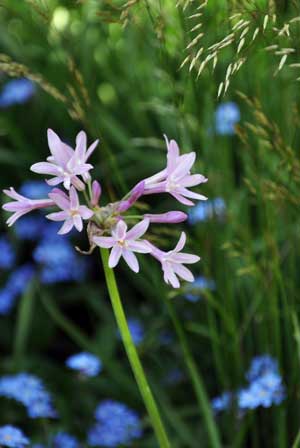 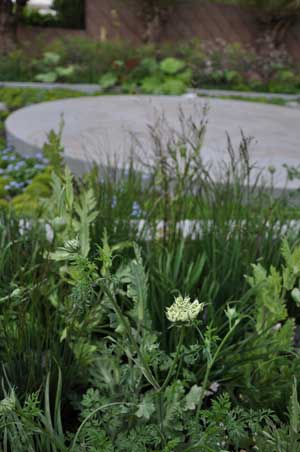 But Blom also used “British natives – Scots pines for the snowy highlands, sea buckthorn for their arid lees, and pollared willows for their Salix with which the people of Lesotho are repairing the ravages of deforestation in their valley delta,” wrote Country Life magazine, which described the garden as a “convincing homage to the mountain kingdom.”

Blom said “Lesotho has a fascinating landscape and culture that confounds one’s expectations of what makes a country ‘African.’ I am hoping to express not only the beauty and rich culture yet also the inaccessibility and fragility of the country.”

She told The Daily Telegraph, “at one end there’s a round pavilion, echoing the houses the people of Lesotho build, the mountains, the pointy hats they wear.” The Telegraph wrote in the middle of the garden, “there is the floor of a mud ‘rondavel,’ an African-style hut, imprinted with tiny footprints. Dotted around it around are willow trees, pines, and papyrus, leading down to a terrace depicting hearts and crowns, a motif Blom saw on a blanket, in grey and pink sandstone.”

On working with global superstar, Prince Harry, Blom said he was a “very detailed, conscientious person – he wanted to know everything about the design  – and in that he reminded me of his Pa.” Blom said he was so focused on the details because he sees the garden not only as an important awareness-building tool for his charitable work but also as an homage to his mother, Princess Diana.

The amount of work that goes into these garden shows, which only last a few days, is pretty awe-inducing. Blom told Radio Times, “this is the plant Oscars. Every plant has to look its best.” To ensure that happened, she actually grew 12,500 plants to make sure she could use 4,500. She also took on a personal trainer to make sure she was in shape to do all the heavy lifting with the trees. “It’s exhausting.”

To ensure the project doesn’t end with the garden’s demise, the team behind this event also produced a song (MP3). Blom told us: “I felt that music, which is massive in Basotho culture, would be a good ongoing medium for the charity and perhaps, if we got it right, might create an income stream for them. With this in mind we came up with this 28 minute ambient piece that ends with a massive pop song.” Created by UK music producer Marc Fox and composed by Peter John Vetesse, the song fuses the UK with Lesotho. “We have real Basotho poets and singers, Welsh Male voice choirs, and Esme, the twelve year old daughter of my friend Melanie Pappenheim (who just sang Damon Albarn’s new opera and is the voice of Dr. Who) sings the pop song. There’s string orchestras, percussionists, and even me!”

Learn more about Blom’s work in this ASLA interview.

In other Chelsea garden show news, gnomes seem to have infested some garden exhibits, to the “horror of many,” writes The New York Times. “‘Gnomes?’ said one exhibitor on Monday, when the show opened in preview. ‘I can’t comment on gnomes.'”