Photographer and video artist Barrett Doherty has created a beautiful 10-minute video that provides a vivid, experiential tour of the 4-acre Franklin Delano Roosevelt Four Freedoms Park in New York City. First conceived by architect Louis Kahn and his close collaborator, landscape architect Harriet Pattison, in the early 1970s, the park didn’t actually open until October last year, some 40 years later. This is Kahn’s first work in New York, and last work overall. In fact, he was carrying plans of the park when he died of a heart attack in Pennsylvania Station in New York City in 1974.

The design was completed after Kahn’s death by David P. Wisdom and Associates and Mitchell/Giurgola Associates. Located east of the UN complex at east 42nd street, the park is named after the “Four Freedoms” Roosevelt articulated in his 1941 state of the union.

In Landezine, Doherty tells us the memorial was first delayed by Kahn’s death and then derailed by the ill fiscal health of New York City during the 70s and 80s. It took William J. vanden Heuvel, a former U.N. ambassador and founder of the Franklin and Eleanor Roosevelt Institute, to launch an effort in 2005 that built the momentum needed to finally realize Kahn and Pattison’s vision. Gathering more than $50 million in private and public funds, the project began to move forward, once some legal disputes among the corporation charged with creating the memorial and the foundations involved in its financing were resolved.

Kahn’s vision for the park was a simple one. Doherty quotes from one of his lectures at the Pratt Institute in 1973:

In Landezine, he provides a detailed explanation of site details that serve as a complement to the video.

Late last year, Michael Kimmelam, architecture critic for The New York Times, reviewed the site: “It gives New York nothing less than a new spiritual heart. That’s to say it creates an exalted, austere public space, at once like the prow of a ship and a retreat for meditation. It’s a memorial, perhaps naïvely optimistic but uplifting and confident, unlike the one at ground zero. It is as solemn as the Roosevelt wartime speech it honors, a call to safeguard the freedoms of speech and worship and the freedoms from want and fear. From inside the great, open granite enclosure that Kahn called the ‘room’ at the tip of the island, a long fly ball away from the United Nations, a visitor looks out over the city and the churning waters of the East River in the direction of the Statue of Liberty, the ocean and Europe. It is the long view that Roosevelt had for America.” 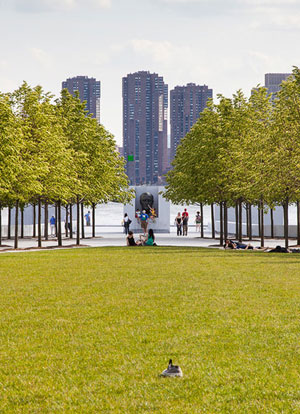 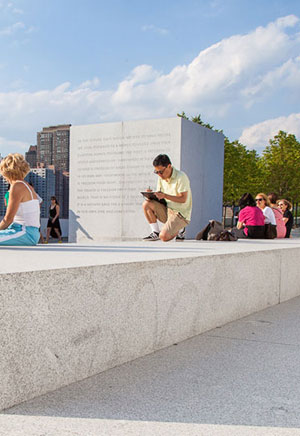 On Kahn’s approach to the park, he writes that this is “probably the closest Kahn came to pure abstract art, a virtual walk-in sculpture.”

Kahn used seemingly minor details to major effect: “In the park’s room he chose to leave inch-wide gaps between the 36-ton granite blocks, polishing only the sides of the stones inside the gaps to create shiny, reflective slits that amplify narrow views through them. It’s a stroke of genius. The blocks seem to flatten when you’re peering through the gaps, a perhaps accidental Alice-in-Wonderland effect that nonetheless derives from the heightened awareness a visitor feels, as one does at some of those land-art sites, of the endlessly shifting relationship between nature and artifice.”

While Mitchell/Guirgola and other construction and engineering firms tweaked the design — by adding lighting, adjusting the layout of the trees, and adding a bust of Roosevelt — the original design is really Kahn and Pattison’s: “Kahn prescribed the size, placement, polish and crisp cut of the enormous granite blocks and parapets (from a quarry in North Carolina), which, like the ancient Egyptian stones at Giza, lend to the site a military dignity and rhythm. He chose copper beech trees for the entrance. He devised the sloping paths that hug the water and meet the plaza at the foot of the lawn. In the important ways this is Kahn’s park.”

Perry Howard, FASLA, made ASLA history in 2007 when he became the organization's first African American president. Before retiring in 2014, he was a professor for 25 years at North Carolina A&T State University, home of the only undergraduate landscape architecture program at a Historically Black College or University. Prior to his teaching career, Howard was a vice president at EDSA, a Florida landscape architecture firm where he designed large parks and new communities. . . . . . #TBT #BlackHistoryMonth #BHM #ASLAdiversity
What's the Next Big Thing in landscape architecture? Maybe it's YOUR idea! Designed as fast-paced, innovative talks, #ASLAGameChangers are an opportunity to share bold ideas that could advance the profession and shape its future. Submit your pitch before March 23, and you could be selected to present at #ASLA2020! Take note: Submissions from first-time presenters, students, emerging professionals, and allied professionals are encouraged. Click the link today’s story for more info!
"After 25 years, I thought some of these issues would be resolved ... The work’s not done." - Professor Austin Allen, ASLA, on the years since Claiming Open Spaces was made. #bhm #BlackHistoryMonth #ASLAdiversity
Hey, students! If you're interested in submitting a project to the ASLA 2020 Student Awards, register today for our info session set for 3:00 p.m. Thursday, March 5. The deadline for submissions is May 11, so don't miss this opportunity to jump-start the entry process. Click the link in the bio to register for the webinar. See you there! . . . . #ASLAawards #StudentASLA #LandscapeArchitecture
In 1998, Karen Phillips, FASLA, was elected as an ASLA Fellow, making her the first African American female Fellow. Fellowship is among the highest honors ASLA bestows on members in recognition of their service to the profession and society. Phillips's career has focused on improving the lives of residents in economically distressed communities. Most notably, she played a key role in the transformation of the Harlem neighborhood in New York City. Learn more about Phillips and her many contributions at ASLA.org. . . . . . #TBT #BlackHistoryMonth #BHM #ASLAdiversity
%d bloggers like this: