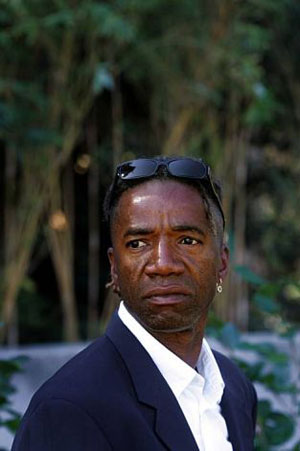 Artist and landscape designer Walter Hood, ASLA, head of Hood Design Studio and professor of landscape architecture at the University of California Berkeley, has been on a quest to find his identity, both as a person and a designer. At a lecture at the National Building Museum, he said it has taken “20 years for me to get comfortable in my skin.” As an African American and Southerner (he’s from North Carolina), he said “I’ve had to locate myself in the traditions of landscape architecture.” Now he has taken that hard-won self-knowledge and years of experience in landscape design to create new “hybrid landscapes,” designed to meet the needs of the communities in which he works.

His hybrid landscapes are either “conscious” or “unconscious.” He called conscious landscapes deliberate “collisions of differing points of view,” which “fuse the un-fuseable.” He said the result of all this fusing is a “strangeness,” because there are multiple types of landscape brought together that perhaps don’t belong together. But he said, too often, he’s asked to create “unconscious” hybrid landscapes, which have strange dualities found when examining them, but on the surface appear to “not disrupt order or continuity.” He thinks conscious hybrid landscapes are needed because they can fundamentally shock people into changing perceptions about what is an appropriate landscape.

Hood talked about the many conscious hybrids he’s worked on first. In Macon, Georgia, he took a 180-foot-wide street, with a square wedged in it, a “typical Southern typology,” and turned it into Macon Yards on Poplar Street, a landscape mash-up of street, park, and plaza. An obelisk from Confederate days in the center is now made the focal point. “By making things visible, we can better understand place.” 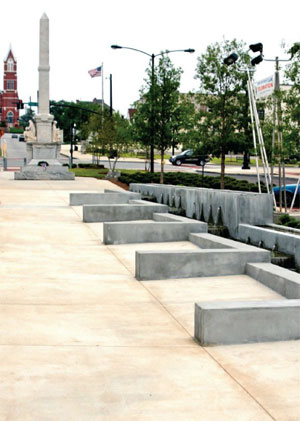 He also described Splash Pad Park in Oakland, California, as a unique mix of different types of public spaces. “People call it a park, but is it really a park?,” he wondered. He says it’s really now something in between — a place where a park, plaza, and street meet. Whatever it is, it has proven incredibly popular, serving as the home for one of the largest farmer’s markets in Northern California.

Hood then talked about Lafayette Square Park, another site in Oakland. He was asked to redesign the space because vagrants had taken control of the space. The earlier form of the park had a classic big X in the center of it, where the paths criss-crossed. At the center of the X were a “bunch of scary guys.” Hood ended up doing away with the idea of a central park that everyone could use — which really “turns landscape architecture history on its head” — in favor of many, smaller separate spaces within the park. This landscape is now about “being separate, not together.” Now people can be “yelling in one part of the park,” while in others, people are sunbathing or using the cook grills for a picnic.

Lastly, he got to perhaps his best-known work, the de Young Museum, in which he created a vivid landscape to match Herzog & de Meuron’s building. To create this design, he went back to the history of Golden Gate Park and discovered that hundreds of years ago it was covered in dunes. It took really a 100 years of effort to turn it into the lush green space it is now. To bring the new space into the modern history of the park, Hood sampled all the trees and plants in a one-fourth radius around the landscape. He called it a “strange, not corporate, landscape” that both brings back what was there before in the form of sand paths, but also what was never there, with huge ferns from Australia, which many think are native, but, of course, aren’t. To add to the strangeness, “each side of the building pushes and pulls up to the landscape in a different way.” He also said “it’s not clear where the parks ends and the de Young garden begins.”

As for the unconscious hybrid landscapes, perhaps they are that way because “we just don’t have a name for their conjunctive beauty.” As an example, he pointed to the massive salt ponds people see when they come in by plane to San Francisco. Hood believes this inability to make the unconscious conscious is connected to our fear of discovering new approaches and putting them into words. As an example, he pointed to a new project that attempts to use the form of a swarm to design a park. Through the project, he’s exploring “whether it’s possible to design a space that will actually get people to swarm.”

His work with the Pittsburgh Park Conservancy and residents of the Hill District, a historically African American community, have resulted in GreenPrint, a new master plan for the area that accounts for the real cultural use of the area, its numerous trails that wind through the woodlands and communities. As a result, GreenPrint started out as a “trail,” but became a 1,000-acre “unconscious” hybrid plan to accommodate the actual usage patterns. The plan fuses together a trail network and plan for development with an existing woody parkland.

He also outlined Solar Strand, a project he created for the University of Buffalo. Instead of simply plopping down thousands of solar panels into the university’s landscape, which is what they had done on their own the first time around to the university president’s disappointment, he organized them into a sort of art work and public space. Some 5,000 panels were organized into a strand-shape that illustrates how they power the nearby campus. The strand went in over a quarter of a mile. Around it, Hood convinced the university’s groundskeepers to “let everything go,” so there are now fields of weeds with paths cut through them. Spaces in the middle of the solar arrays are set aside as public spaces, laid with concrete chunks dug up for the project. Somehow, these spaces have taken off as spaces for markets, not something Hood planned.

In his final remarks, Hood described how his creative process works with local clients, how he explains his complex thinking. He said he tries to tell his clients that “landscapes are messy and filled with contradictions; they are not clean.” He laughed that “clients want to know exactly what you are doing.” But, too often, this intuitive designer said “I don’t know. I’m just compelled. When I’m not here, I’m a mess trying to put it together.”

Still, Hood wants to know the boundaries or rules of the project before he breaks them. He also wants to keep an open mind as he moves through the linear design process because “epiphanies don’t happen when you think they will happen. Strangeness comes from the side. One has to be receptive.”

Indeed, he believes this open-minded receptiveness is what’s critical to working with communities. He fears coming in as an outside designer, imposing some artistic vision foreign to these places. He seeks to really work with the local culture. “You have to strip naked before entering a community. The can be no preconceived notions. You have to let it go and see them real.”