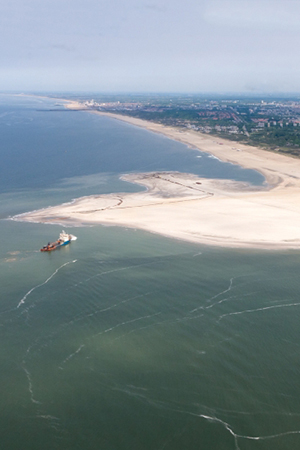 Sea levels are projected to rise dramatically over the next century, impacting coastal infrastructure that was never designed for these new conditions. In the face of this change, simply maintaining the status quo is an implausible prospect. At the Society for Ecological Restoration (SER) conference in Madison, Wisconsin, a set of landscape architects and ecologists proposed ecological strategies for adapting to sea level rise. By harnessing previously ignored or repressed ecological systems, coastal settlements can more effectively respond to their changing landscapes.

Kristina Hill, Affiliate ASLA, a landscape architecture professor at the University of California, Berkeley, discussed strategies for beach restoration in the context of rising seas. Using Virginia Beach as a case study, she explored the potential of the Dutch zandmotor (or sand motor) method of beach restoration (see image above).

Virginia Beach claims to have the longest recreational beach in the world, and, therefore, an economic impetus to keep its beach in a static, predictable form, requiring periodic restoration work. Traditionally, beach restoration work, which was last completed in Virginia Beach in 2002, involves dumping large amounts of new sand on the shoreline and spreading it around with a bulldozer. This process is expensive and highly disruptive to beach ecology.

The zandmotor method involves harnessing wave action to distribute sand across the shoreline. Instead of applying sand directly to the beach with bulldozers, sand is dumped offshore. Over time, coastal currents move the sand and deposit it along the beach. This method is much cheaper and less disruptive than traditional beach restoration.

In order to be applied in Virginia Beach, however, cultural attitudes toward the beach must change. Hill stated that hotel owners are leery of the irregular beach arrangements that result from the Dutch method, desiring the predictability that is achieved through traditional methods. Still, Hill expressed hope that eventually people may embrace a changing beach as something “exciting and beautiful to check in to see every year.” [See more on the Dutch sand motor at Landscape Architecture Magazine (LAM)]

Next, Shimrit Perkol-Finkel, SeArc – Ecological Marine Consulting LTD, spoke about retrofitting existing coastal infrastructure to support diverse marine ecosystems. Perkol-Finkel described how much existing construction consists of smooth concrete, a material that is not hospitable to marine growth. As an alternative to traditional concrete, she proposed the development of ecologically-active infrastructure that enhances ecological systems without compromising function. Enhanced biological buildup, including the proliferation of oysters and corals, can actually enhance the strength and durability of this infrastructure.

Speculating that concrete’s poor ecological performance has to do with its alkaline composition and smooth texture, Perkol-Finkel discussed a series of experiments with alternate concrete mixtures and arrangements. These experiments, which took place both in the lab and in the field, revealed that some concrete mixes perform significantly better ecologically than others. Furthermore, textured concretes proved to be far more conducive to marine life than smooth concretes. Slight modifications to the composition, texture, and design of marine infrastructure can lead to an enhanced ability to attract flora and fauna. This translates to an infrastructure that is biologically active, contributing to both ecological health and infrastructural function.

Whidbey Island in Puget Sound was given as a rural case study. Historically, the 600-acre site consisted of tidal marshes and mudflats. Most of this was lost with the introduction of a dyke and pump station, as well as a state highway and navel base. Recognizing that the pump station is extremely expensive to maintain, the restoration plan involves the wholesale removal of the levee and the replacement of the state highway with a bridge. By removing everything that limits the site’s hydrology, these modifications allow natural processes to rebuilt marshland – a process-based restoration plan.

Similarly, restoration efforts in Seahurst Park, a suburban setting, involve the removal of hard infrastructure to allow natural processes to function. In this case, a series of bulkheads have prevented landslide material from reaching the park’s beach, piling up uselessly only to be eventually hauled away by trucks. As a consequence, the beach has lowered 3 – 4 feet over 30 years. The restoration plan for the site involves the removal of these bulkheads, allowing landslide debris to reach the beach and rebuilt it over time.

One thought on “Working with the Changing Shore”