Getting to know the High Line in New York City over the last year, it has been lovely to discover the back story: the heroic efforts involved in saving the rail yard structure; the development of the park, with its effective design and the accomplishments of the construction; the involvement of the local community; and the raised aspirations of planners everywhere for what a small area of park might achieve in a big city. As someone from the UK, the use of the American word “yard” instead of “garden” never sits entirely comfortably, as it has a more industrial meaning, but we understand each other very clearly here in the High Line’s third phase in the Rail Yards.

Any lover of naturalistic planting and contemporary hard landscaping can marvel at how literally millions of people are being funneled through an exquisite experience. However, leaving aside the overwhelming praise for the existing sections, the first reaction on seeing the new section is the makers, James Corner Field Operations and Diller, Scofidio + Renfro, have clearly taken on board the park’s more functional deficits and have expanded the park in new directions.

I’ll always remember landscape architect Charles Jencks’ words that the motivation for his Garden of Cosmic Speculation began by wanting somewhere for the family to swim, and that good design always begins with a function. The third section of the High Line capitalizes on its role as a latter-day addition in the life of the project by offering more practical functionality. In terms of usability, new features include tables, see saws, xylophones, a children’s play area, and a wheelchair/buggy-accessible area of track. 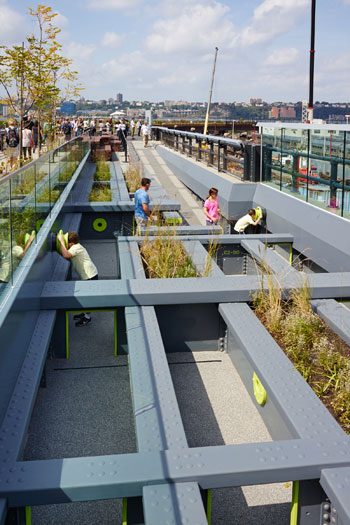 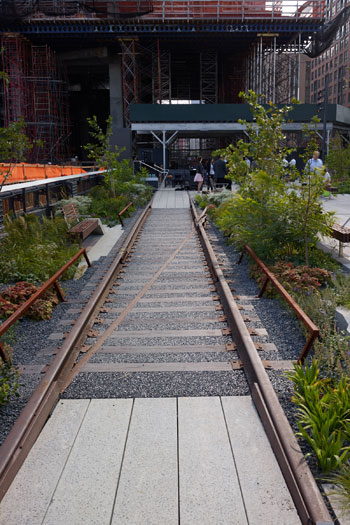 For those wanting the authentic High Line experience, there are areas of the original rail tracks left to self-seed with wild plantings. A fence that acts as a stark barrier between the asphalt and area of nature is very noticeable, but I’m told it will come down eventually, although it leaves you with the suspicion there may be more development to come. This area is not lit at night and will be closed earlier than the rest. It builds on the experience of the place by providing more themed nostalgia for the abandoned aesthetic of the rail track prior to the redevelopment. Does this represent affectionate nostalgia, or a sense of loss? 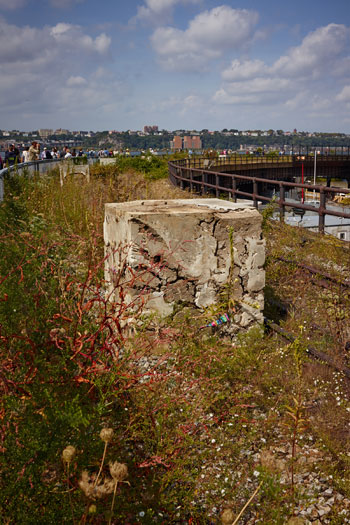 Being there for the opening, I got to hear the High Line experiences of people from all walks of life. There was something very special in talking to someone, now in their 60s, who has supported the project the whole way but used to come and play here as a kid. This was the story I heard most: tales of what it was like to sneak in and mess about when it was still a rail yard, what it looked like in its derelict state. The sense of discovery and adventure in these experiences was visceral. There was something people valued in having a space not laid out by planning convention, but a raw experience.

I met Mitchell J. Silver, the new commissioner for New York’s parks, a week earlier and discussed the further development of the open areas around the High Line. The rail yards that the new phase circles will all be covered and developed over a 5-10 year period. The city is planning a number of significant new high rises the length of the park, and another ground-level green corridor of wider parks will lead north from there. 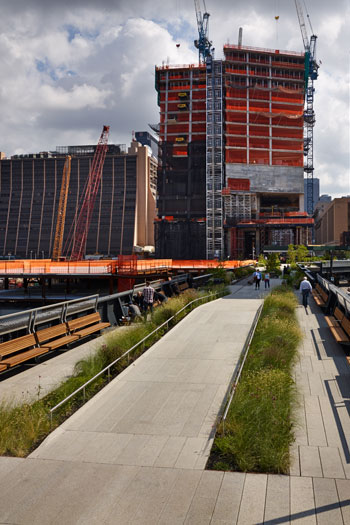 The success story for the city isn’t so much one of recreation, but the wider regeneration of the area and increase in property values to the point where the world’s best-known architects are now seeking permissions, which can only further exaggerate the High Line as an oasis in city life. This park has also created new opportunities for people with similar infrastructure around the world.

This guest post is by Allan Pollok-Morris, a landscape photographer. His most recent book is Close: Landscape Design and Land Art in Scotland.

One thought on “Yard Meets Garden in High Line Phase 3”