The estimated 3.3 billion people who watched the opening ceremony of the 2016 Olympics in Rio de Janeiro, Brazil, saw a beautiful and compelling case for fighting climate change. Brazil, which is to critical to global efforts, given its stewardship of the Amazon rainforest, decided to use its big moment on the stage to make the message clear: climate change will impact us all, and we must all do something, even if it’s simply planting a tree.

In the beginning of the ceremony, the Amazon was depicted as the great web of life, a multi-layered network, which is really how a forest functions, according to biomimicry pioneer Janine Benyus (see image at top). We then see dancers from the indigenous tribes of Brazil symbolically managing the forest resources in sustainable ways. 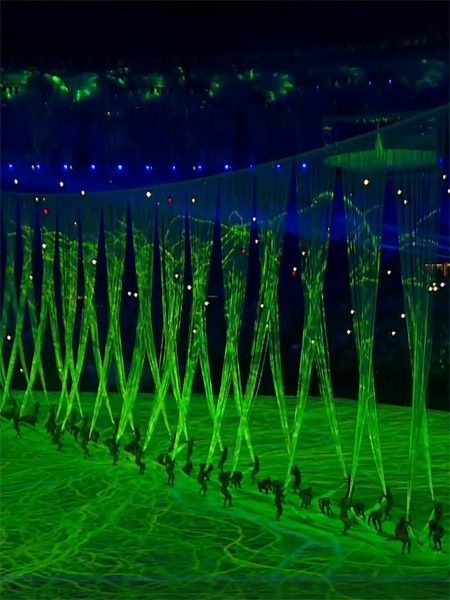 But later, we see the forest come apart, as its colonized by the Portuguese, as their ships slice through the sea of greenery. In the ceremony, dancers dramatized the conflict between the native forest dwellers and the Portuguese, between the stewards of ecology and the forces of extraction and trade.

We then see dancers representing the millions of slaves brought over from Africa. Then we see how the forest was further broken down, turned into farms, and, finally, urbanized.

As the ceremony progressed, dancers moved off stage and the Brazilian Olympics organizers shifted the focus to educating the world about what the climate models predict, displaying this data showing global temperature increase.

As the narrator states — “the heat is melting the ice cap; it’s disappearing very quickly — an animation displays, showing what a melting North Pole will mean for the world’s waterfront cities, including Amsterdam, Dubai, Lagos, Shanghai, Miami, and, finally, the home of the 2016 Olympics.

After the doom and gloom, a child then walks through to the middle of the stage and sits down next to a sapling, which itself glows, spreading the web of life once again. The answer to climate change, according to the Brazilians, is to protect and renew our forests.

The ceremony is a reminder that much of the world is very worried about climate change and has moved way beyond any controversies around the science. According to the Pew Research Center, majorities in 40 leading countries say climate change is a “serious concern,” and 54 percent say it’s a “very serious concern.”

While the ceremony may help educate the world, its message may also be directed at some key local audiences. Environmental officials in Brazil have been fighting a tough battle against cattle ranchers, loggers, and farmers who continue to engage in illegal burning and clearing of the rainforest and must have powerful political backers who protect and enable this. And the message may also be aimed at international donors who can bolster Brazil’s fight to save the forest; it’s a plea to ask them to do more to help this developing country.

Deforestation in the Amazon just hit the highest levels in 8 years, with 240,000 acres destroyed in June 2016 alone. About 19 percent of the total Amazon rainforest is gone. It’s clearly time to geo-engineer the planet in a sustainable way: let’s regrow the lost forest and then plant billions more trees.

3 thoughts on “Brazilians Use Olympics to Deliver Climate Message”